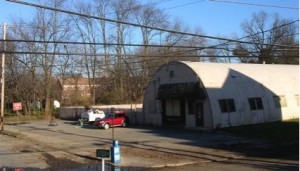 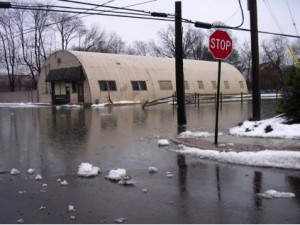 The site was adjacent to a tributary of the Brandywine River that backed up frequently during heavy rains. 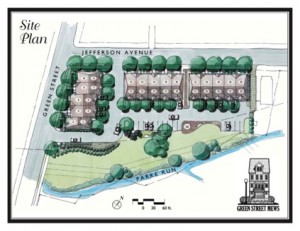 The land plan mitigated flooding conditions by freeing up the floodway while creating extensive open space and parking for the residents. 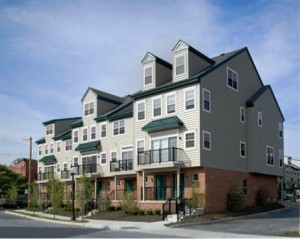 The completed buildings emulate the historic townhomes in the surrounding neighborhoods with extensive brick materials, dormers, and gable roofs. 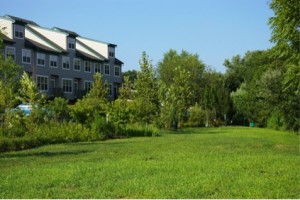 A bio swale and extensive open space for the residents was provided along the stream at the rear of the property as part of the land plan. 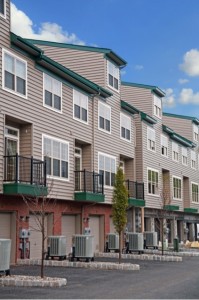 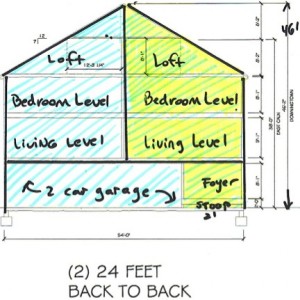 Section shows how two dwellings fit in a single building footprint; garages are on the grade level beneath the living and bedroom levels. 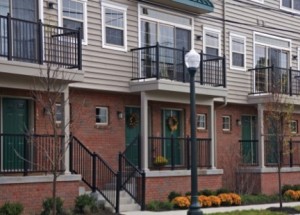 Raised front porches create an inviting street scape while elevating the living spaces further out of the floodplain. 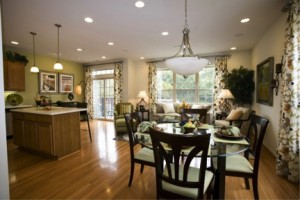 9’ ceilings on the living level and tall windows make for a sunny and spacious space. 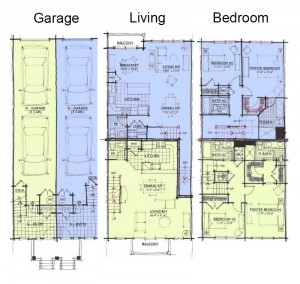 Downingtown Borough, once a thriving paper mill town, had witnessed a steady fall-off in manufacturing activity and an erosion of its economic base. Its location was ripe for revitalization, however, with its available infrastructure to support new development, proximity to major commuting arteries, an R-5 train stop, abundant parks, and an excellent public school district. However, there was one unfortunate historic flaw: its situation at the mouth of the Brandywine River with resulting chronic flooding problems.

At a tributary of the flood prone river stood a vacant World War II-era Quonset hut on 1.6 acres which had formerly been used for light manufacturing. The property was surrounded by a residential neighborhood of early to mid-twentieth century townhomes, many of which had been ravaged by flooding over the years. To further complicate matters, this site bore traces of contaminated soil left over from the days when coal ash was used as a fill material.

Progressive saw an opportunity to redevelop this contaminated, floodplain site into attractive, affordably priced townhomes visually compatible with the surrounding historic architecture. Located just two blocks from Main Street and less than a mile to the Downingtown commuter train station, the site catered to an untapped market seeking a walkable and maintenance free life style. In the process, the project could alleviate local flooding conditions by providing needed storm water management and serving as a catalyst to secure public funding for flood control projects.

A Creative Site Plan in Partnership with the Borough

To achieve these objectives required the property to be rezoned and the architecture to be designed to accommodate floodplain conditions. Progressive entered into a partnership with the land’s owner who agreed to wait to be paid until the entitlements were obtained in exchange for sharing in future profits of the development. In conjunction with Borough Council and staff, Progressive then developed a "performance zoning" overlay ordinance which encouraged flood improvement projects, on-site parking and open space in exchange for an incentive of greater density. As a result of the new ordinance, Progressive’s site plan ended up with 30 townhouses, 3.5 parking spaces per unit and nearly 50 percent open space at a density of 18.5 units per acre.

The compact site design actually alleviated flooding conditions by allowing the new homes to be constructed close to the existing streets and by demolishing the existing Quonset Hut which had previously protruded into the floodway causing the stream to back up. The new, more efficient land plan allows the stream to flow more freely under flooding conditions. In addition to new storm water pipes and inlets provided by the project, the Borough used public grant funds to rebuild the culvert at the south east corner of the site into a higher and wider elevation, further relieving flooding conditions. Finally, a large flood control retention basin was completed upstream on by the Borough using state and federal funds. The effect of these projects was to lower the floodplain in the project’s vicinity by over a foot.

Notwithstanding the improved floodplain, the buildings were built to withstand any future flooding in several ways. First, garages in entirely masonry material were placed underneath the homes with the living spaces located on the second level. The garages were hidden from street view by way of rear driveway access. The raised front porches served the dual purpose of creating an inviting front street scape while raising living spaces further out of the floodplain. In the unlikely event of future flooding, flood vents were installed between the garages walls to remove any hydrostatic pressure. And because the garages extended nearly the full length of the buildings, each homeowner received a two car tandem style garage. Finally, the site itself was elevated several feet using clean fill which had the secondary benefit of capping the contaminated soil. A release of liability was received from the Pennsylvania state department of land recycling under the State’s Act 2 brownfields program.

The townhomes at Green Street Mews enjoyed a unique back to back design. In essence, two townhomes were built in the space of one building footprint with one home in the front in the rear. Each home had its own front door and its own private outdoor living space and garages. The efficient design enabled the developer to construct the homes more cost effectively, thereby lowering the sales price to an affordable low to mid $200,000’s for two and three bedroom, 2.5 bath homes with nine foot ceilings. The developer secured and provided favorable mortgage financing. As a result, all but one of the homes were purchased by first time homebuyers.

As further proof of the appeal of Green Street Mews to the target market, the 30 homes were sold and built in a period of just fifteen months despite the recessionary climate of 2007-2008 for an overall pace of two homes per month. 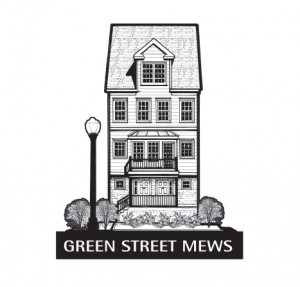